It won't take long to recognize that the First Coast has a unique blend of communities ranging from small-town charm to big city hustle-bustle. The biggest challenge may be deciding which community you’ll choose to call home. 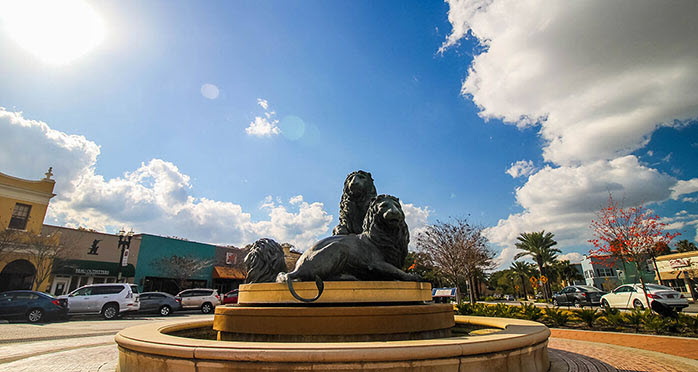 San Marco
If the square is the center of San Marco, the ornately-made bronze lion sculptures, accompanying fountain and gazebo are the square’s trademark. On either side of the square are a vibrant array of shops and a mix of local fare and franchised cafes and restaurants from which to choose. Acquiring its name from the Piazza San Marco in Venice, Italy, this neighborhood is a potpourri of architectural styles and uses. From large, expansive riverfront homes to quadstyle apartments, San Marco has a lifestyle fit for both singles and families. The San Marco Preservation Society keeps an eye out to ensure this community’s historic properties are being restored to their original intent. San Marco is also home to Theatre Jacksonville, the oldest continuously running community theatre in the U.S. and the San Marco Movie Theatre, a community favorite for dinner and entertainment.

San Jose
Travel south of San Marco on Hendricks Avenue and you will come to the area known as San Jose, offering everything from private clubs to some of the cities top golf courses and home to The Bolles School, one of the nations best private schools. This area is where magnate Alfred I. DuPont built his expansive 15,000-square-foot summer home, Epping Forest, which has since been converted to a yacht club that is the center of an exclusive residential community featuring beautiful estates, garden homes and condos. Epping Forest, which includes 58-acres with 3,200 feet on the St. Johns River, is known for its superb fitness facility and walking paths. 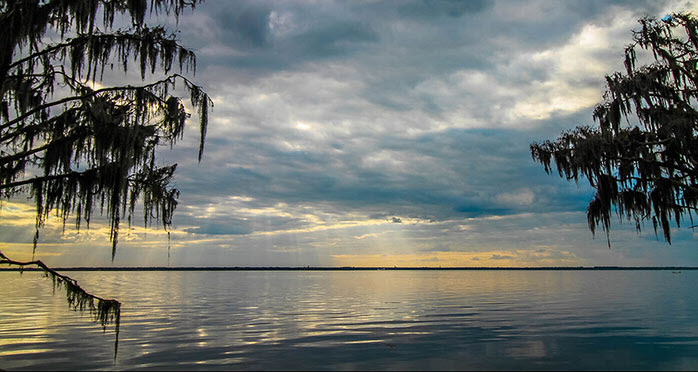 Mandarin
Still one of the fastest-growing communities in Jacksonville, Mandarin offers something for young and old alike. Whether you’re seeking a starter home or a large riverfront showplace, Mandarin offers it all. This community’s beauty has been chronicled through the ages. In her book, Palmetto Leaves, author Harriet Beecher Stowe tells about her life in Florida and refers to Driving through Mandarin Neighborhoods Mandarin as “a tropical paradise.” Today, the pulse of Mandarin is the long and winding San Jose Boulevard and St. Augustine Road which both offer everything from retail shops, strip centers and a multitude of restaurants. Travel further into Mandarin, you will see everything from gated communities to new subdivisions offering many different home choices with an array of amenities. 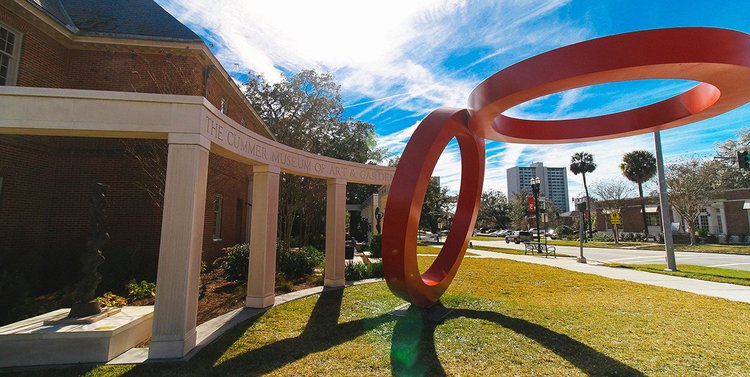 Riverside & Avondale
Travel the St. Johns River southward from downtown Jacksonville and you’ll soon enter a magical community offering tranquility with a dash of modern-day charm. You are now in historic Riverside/Avondale. Known for elegant homes in a multitude of styles, Riverside/Avondale Shopping District Riverside/Avondale is closely watched by Riverside Avondale Preservation, or RAP, to maintain the historic integrity of this charming community. Offering a mix of riverfront condos, upscale retirement living and apartments, Riverside/Avondale is also the hub of the artistic community with culture and inspiration at every turn. Take your children for a stroll in one of the many parks in the neighborhood, or walk to some of the best restaurants and coffee shops the city has to offer.

Riverside/Avondale, while home to the largest National Historic District in the Southeastern U.S., is experiencing a re-development. Riverfront condos are going up near St. Vincent’s Medical Center, in an area just east of the Five Points Shopping District. This area is slated for a huge mixed-use development near Memorial Park.

Ortega & Venetia
Drive south along the St. Johns River in Riverside/Avondale and, as the river curves, you will eventually get to one of the oldest, most charming neighborhoods in Jacksonville — Ortega. Recently named the 46th wealthiest neighborhood in the U.S. by Worth magazine, Ortega is home to the Florida Yacht Club, the oldest yacht club in the state. Like Riverside/Avondale, Ortega boasts quiet, charming tree-lined streets and beautiful homes ranging from quaint to breathtaking. The community’s shopping district is the staging area for Ortega’s annual Fall Festival where you’re sure to see horse-drawn carriages offering rides, lots of families having plain, simple fun. Not far from Ortega is the waterfront area known as Venetia and the home to the Timuquana Country Club. Venetia offers quiet neighborhoods with well-manicured lawns and award-winning public schools. Living in Venetia was once considered to be country living. 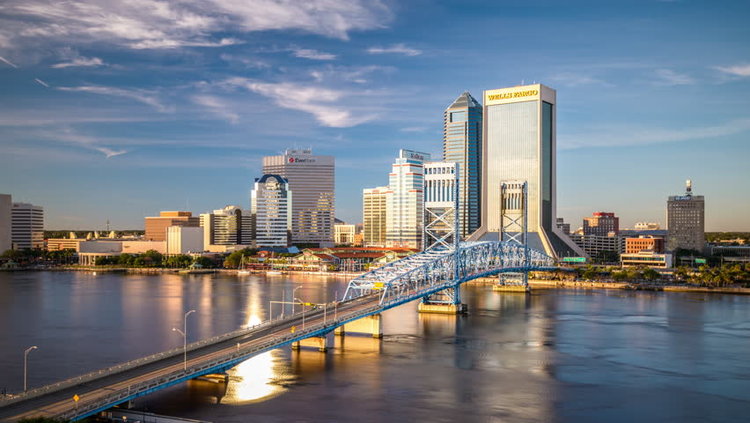 Downtown Jacksonville & Springfield
Downtown Jacksonville is undergoing a number of sweeping changes in both housing options, new nightlife options and government amenities, such as a new main library. Downtown is home to many thriving businesses and the headquarters of CSX Corp., a Fortune 500 company. There is a strong push to create new housing opportunities in the urban core. Developers have converted former office spaces into luxurious loft apartments and condominium developments unlike those previously available in the River City. Travel North on Main Street and you enter one of Jacksonville’s re-emerging neighborhoods, Springfield. Home to Victorian-era architecture, Springfield is experiencing new home construction balanced with a mix of historic remodeling that is luring in new investment and new families. 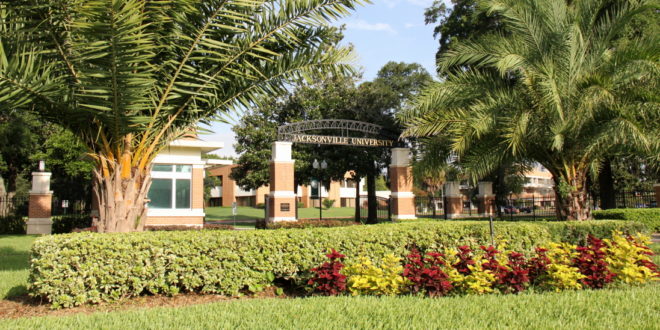 Arlington
History and modern tradition come together to make the Arlington area one of Jacksonville’s truly unique communities. Located on the banks of the St. Johns River, Jacksonville University offers world-class postsecondary education on its lush, green Arlington campus. A lot of new development near the Atlantic Intracoastal Waterway in East Arlington is underway. Look for a number of waterfront mixed-use developments that feature retail shops, marinas and condominiums.

Westside
The Westside has grown in recent years as developers search for expansive alternatives to some of the city’s more crowded regions. Because it still contains a lot of untapped potential, the Westside can still be marketed as a community that offers the tranquility of country living. A lot of diverse investment has crept into the Westside in recent years. The largest Westside development since Argyle Forest in the 1970s, that will take years to build out, is OakLeaf Plantation, which has come to life on 6,400 acres of unspoiled land adjacent to the Jennings State Forest, which has 20,000 acres. Straddling parts of both Clay and Duval counties, OakLeaf has caused officials to plan for new public safety services and new schools to meet future growth in this Development of Regional Impact or DRI. Another factor that is sure to contribute to growth in the Westside is the manufacturing sector at the Cecil Commerce Center, the former Cecil Naval Air Station, which is quickly becoming a hub for aerospace companies. 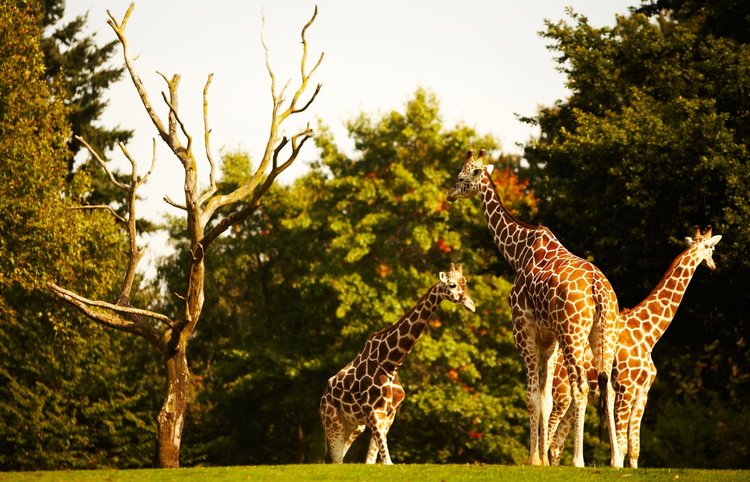 Northside
The Northside is pegged by real estate experts as the next big boom! Plenty of uncharted land remains on the Northside as do a myriad of landmarks. The Northside is home to the Jacksonville Zoo and Gardens, Jacksonville International Airport, Big Talbot and Little Talbot Islands, Huguenot Memorial Park, as well as the Timucuan Ecological and Historical Preserve. This area is filled with pristine marshes, woods and rivers, which are sure to lure developments of all types in the coming years. 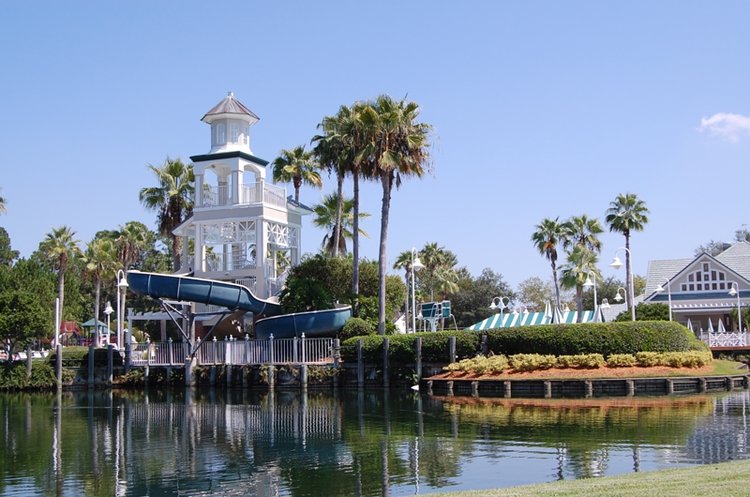 The Beaches of Jacksonville 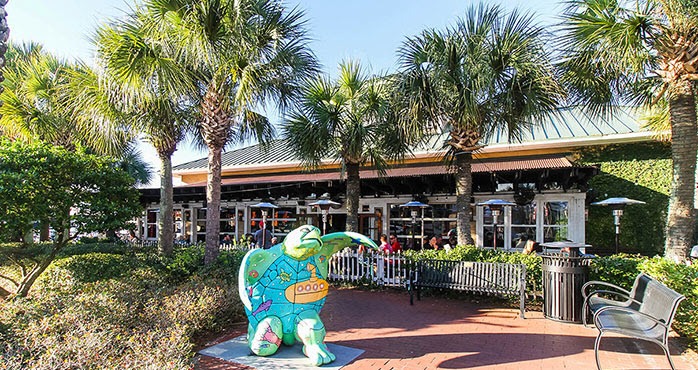 Atlantic Beach & Neptune Beach
Millions of dollars in both public and private investments have flowed through the beaches communities in recent years as a wave of oceanfront re-development has taken place. But, you have to look closely to see which beaches community has benefited the most because the three cities of Atlantic Beach, Neptune Beach and Jacksonville Beach all seem to weave together along Third Street, which is also A1A. A number of hotels have been demolished altogether as developers make way for new, trendy upscale condominium developments.
The last decade has seen Atlantic Beach establish a “Town Center” at the foot of Atlantic Boulevard and Third Street. It’s an entertainment and restaurant complex that attracts people of all ages. 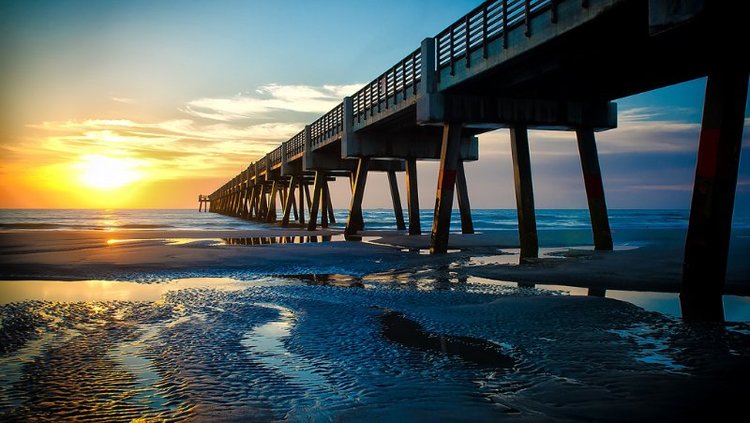 Jacksonville Beach
Jacksonville Beach continues to modernize and expand. With hip restaurants, bars, shopping and young businesses, Jax Beach has a lot to offer everyone. The SeaWalk Pavilion offers a spectacular oceanfront venue for festivals, concerts and outdoor movies. The beaches communities host a large number of festivals during the summer months beginning with the Annual Opening of the Beaches. Other festivals include Fiesta Playera, a celebration of latino culture filled with great food and soulful music, and the popular Springing the Blues festival. 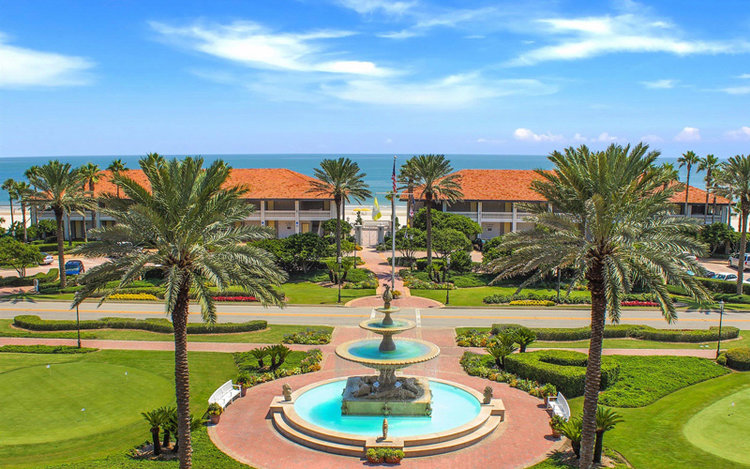 Ponte Vedra Beach
If you travel south on A1A into St. Johns County, you will enter the upscale community of Ponte Vedra Beach. Once part of a pristine wilderness where people went to retire, this community offers a balance of residential choices, depending on your lifestyle and budget. Select from a range of condominium choices, diverse-style homes or custom waterfront properties. Homes range from the starter variety up to 12,000-square-foot oceanfront palaces surrounded by sand dunes and majestic oaks. Ponte Vedra Beach is also home to the marshes and streams of the state-protected, sensitive Guana River State Park, a popular preserve offering many relaxing water activities. Today, Ponte Vedra Beach is on the verge of new heights as St. Johns County Public Schools is building new schools to meet the demands of growth. St. Johns County Schools are regularly scored as the top school district in Florida.

This community is also home to the headquarters of two world-class sporting organizations, the PGA Tour and the ATP, the governing body for the men’s international tennis circuit. Ponte Vedra Beach also has its share of top-notch restaurants, shopping and commercial office space.

Nocatee
Located in northern St. Johns County, this development of regional impact (or DRI) is the equivalent of an entirely new city from concept to fruition. Nocatee is considered one of the fastest growing communities in the United States. Just minutes to Ponte Vedra Beach and offering every amenity your family would ever need, Nocatee neighborhoods wind around nature preserves and carefully planned trails for running and exploring. Estimated to take 20 years to complete, Nocatee will feature a number of housing choices including an 'active adult', condominium, and single family homes as well as retail shopping, parks, office space, houses of worship and schools. 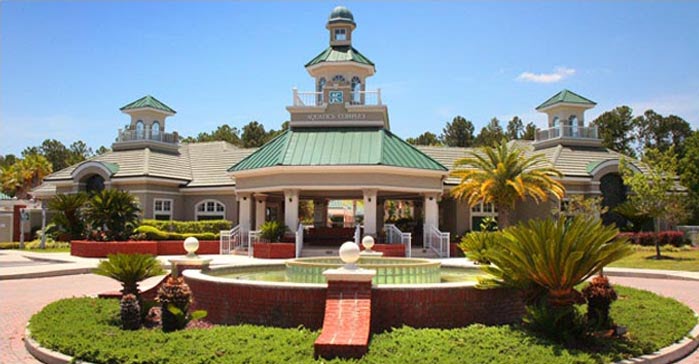 St. Johns County
St. Johns County is probably the fastest-growing area on the First Coast. Such spectacular communities as Julington Creek Plantation and World Golf Village as well as County Road 210 and Switzerland offer lifestyle choices as gated communities, golf communities, condominiums and apartment homes. Like many other First Coast communities, golf plays an integral role in this region. Choose from courses designed by Jacksonville native Mark McCumber to golf legends Arnold Palmer and Jack Nicklaus. The vast amount of development on St. Johns County Road 210, offers the peacefulness of country charm that’s within a shot of the city hustle-bustle. And, further south of County Road 210 is the prestigious World Golf Village, which is home to the World Golf Hall of Fame, shops, restaurants and an IMAX theater. The area, which also has a new interchange at I-95 South, has seen a number of new hotels crop up. 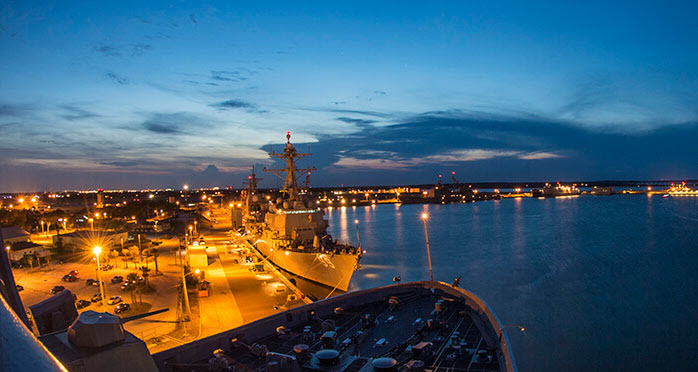 Mayport
Once considered a sleepy fishing village that gave birth to the world class Jacksonville Jazz Festival, Mayport is on the brink of a renaissance. Look for plans to come to life to create a thriving “Town Center” where retail and new home construction will peacefully co-exist to bring new families to the area. 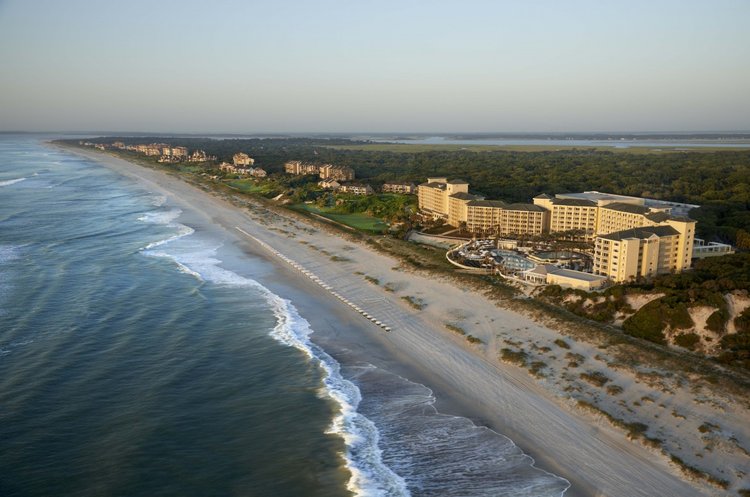 Amelia Island & Fernandina Beach
From trendy condos to historic homes, Nassau County’s Amelia Island and Fernandina Beach offer the warmth and charm of small town living while being just close enough to the action of the city. Amelia Island’s charm and allure have grown immensely over the last several years. Home to many bed and breakfast inns, the Ritz-Carlton on Amelia Island oceanfront hotel, and world renowned golf courses, Amelia Island offers the perfect tourist destination and quaint, peaceful lifestyle away from the hustle and bustle of the city.